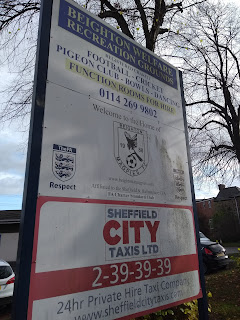 I made the most of another local match today, taking in a Sunday cup encounter between Beighton and Birley. It was a beautiful morning as I made the short drive to the ground, with colourful Autumn leaves underfoot. The weather was much better than the 1st half at Treeton!

Beighton Welfare's match initially felt like a sideshow to the kids match taking place on an adjacent pitch. Beighton Magpies were taking on Charnock Ridgeway, and as I arrived, there was a controversial incident when the ball looked like it was looping in from a header, only to be pushed off the line by the keeper. Did it cross the line? No-one could tell, despite the protestations of the home support. It was a pretty decent match, and drew the attention of many of the Beighton/Birley coaches and players before kick-off. 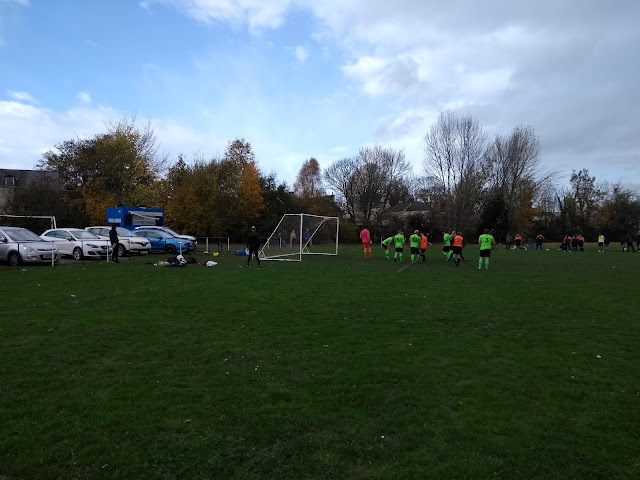 Today's encounter was a 1st Round cup match, and pitted Beighton (in the 1st Division, which is confusing the 3rd tier in the Sheffield Imperial) against Birley (in the top division). There used to be a Beighton Albion who played at the nearby Robin Lane pitches, so I'm not sure if Welfare are connected to this club in any way. Beighton were in bright orange, and Birley in lime green, so, with the leaves on the grass and the trees in the background, this was a very colourful match.

The lime greens had the best of much of the 1st half, and were more incisive in the attack and better organised overall. There were a smattering of half-chances for both sides, including a couple of brief goal-mouth scrambles. The opening goal came on about 40 minutes, when a flick from a Birley player hit the crossbar and an alert forward was there to rifle it home. They probably deserved their advantage. Then came a crazy couple of minutes, when Birley made it 2-0 with a header, and then their left back flew forward to make it 3-0. Given the relative positions of the sides, and the match so far, this felt like it could be game over. 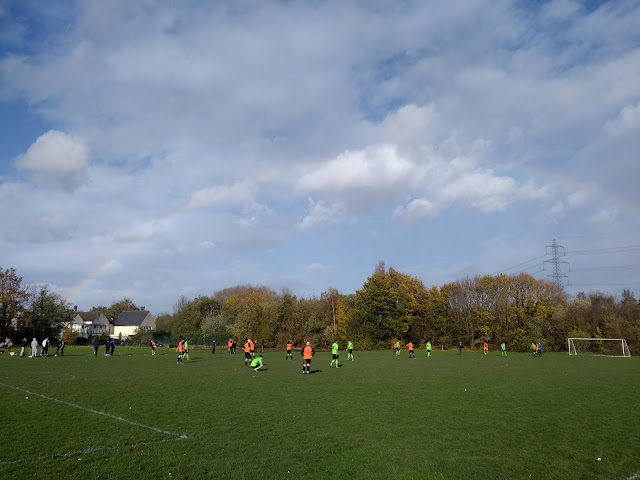 In the second period, the pendulum swung towards Beighton, who really took the fight to Birley. Birley were nonetheless still creating chances and hit the crossbar with a header, before number 7 forced a great save from the bearded home keeper. At the other end, at about the the 60 minute mark, Beighton equalised when number 12 followed up on an excellent save from number 15. This seemed to galvanise the side, who continued to match Birley in the middle. 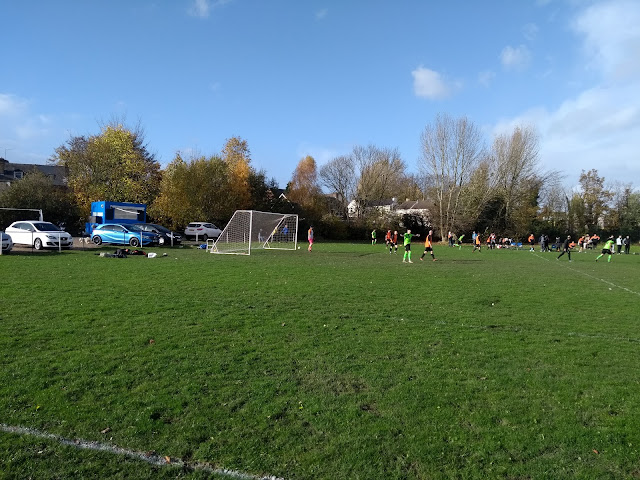 They were kept out by some excellent goalkeeping, but then the keeper brought down a player for a clear penalty. Number 7 calmly slotted away and it was 3-2. Game most definitely on. This was a fast and bold encounter and Birley very nearly made it 4-2 when a drive from number 8 was superbly tipped over (even the away keeper applauded this moment!). Just as Beighton had a final corner (and their keeper ran forward) the final whistle went. This had been a solid encounter and the teams were fairly decently matched overall, making for a good cup tie.

This may be the last match I see before the latest lockdown, and I was pleased to finally make it to the 'Welfare Ground'. Let's hope this level of football can continue after the lockdown - it has survived an awful lot so far, and brings so much happiness and hope to players, fans and coaches alike. Whatever craziness is going on the wider world - pandemics, wars - football always tends to 'find a way'. 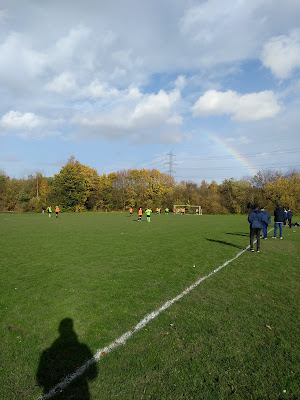 Waking up to the news of another potential lockdown, I decided to make the most of the opportunity to take in a match at Treeton Terriers. This a short walk from our house, and - up until quite recently - had a magnificent set of historic floodlights. As well as being free, this game was also likely to enable plenty of 'safe' social distance. The game kicked off at just before 10:30, in the middle of squally rain and a wild, unpredictable wind. Brown leaves coated the far end of the pitch and the scene was set for a very Autumnal football match.

This was actually the first match I've seen in the Sheffield & District Fair Play League. As far as I understand it, this is a rung down from the Sheffield & Hallamshire County League, but I have never to date managed to take in a match. There is some appeal to going ever more local in these uncertain times, and I have to say I enjoyed this visit over the River Rother. 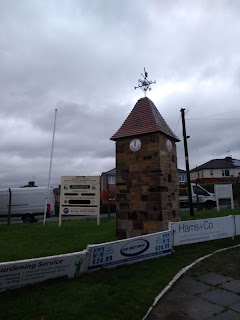 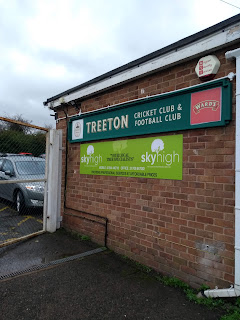 I arrived just after kick-off, but in time for an early goal for Treeton (in black and white stripes). The AC Southside keeper fumbled an early shot and Treeton's number 9 had time to take a touch and plant it into the bottom corner. Treeton were by far the dominant team in the first half, and nearly doubled their lead when number 10's shot was parried away. AC Southside were out-muscled, out-run and out-fought in a fairly one-sided first half. Meanwhile, on the sidelines, I was getting soaked, and ended up being similarly out-fought by the elements (my umbrella didn't help in the rain and was being buffeted from side to side by the sweeping wind).

The second half saw AC Southside gradually edge into the game, before really starting to dominate possession and chances. Their number 16 had an effort well-saved, before 23 could only blast over with the goal at his mercy. Treeton had a pretty miserable second half, culminating in the withdrawal of one of their players with a shoulder injury. But, that said, they did still offer an attacking threat, with several counter-attacks very nearly resulting in a crucial second goal. AC Southside poured forward as the minutes ticked down, and their golden chance came when 16 found himself in the box with the ball at his feet. He whipped it quickly towards goal, only for the home keeper to tip it onto the bar and out for a corner. It was a fantastic save, and proved to be a decisive moment as Treeton clinched a 1-0 win. Like the Maltby match the other night, this was a tight battle which one team just managed to edge out. 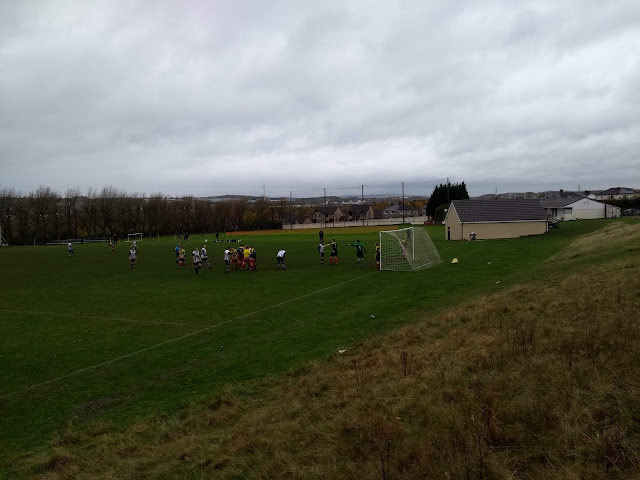 This ground is well worth a visit. The steep earth bank around one side of the pitch (and the vacant stumps in the grass where the floodlights used to be) hint at some of the club's past glories. In the present day, this proved just the football tonic I needed in these crazy and unpredictable times. 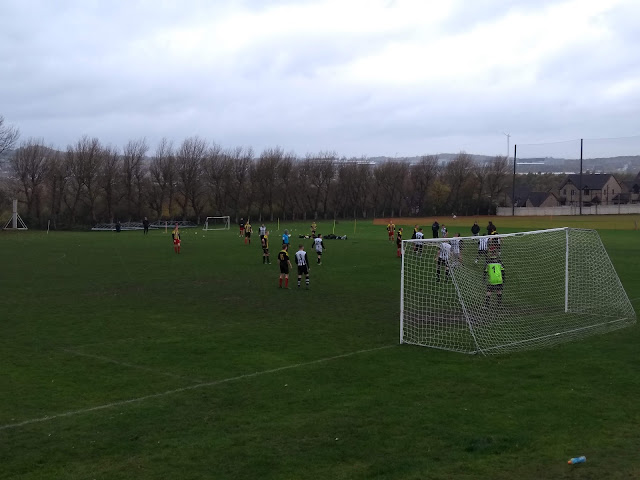 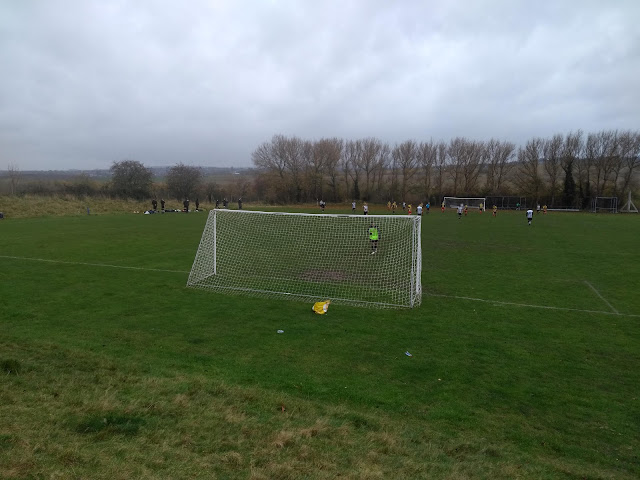